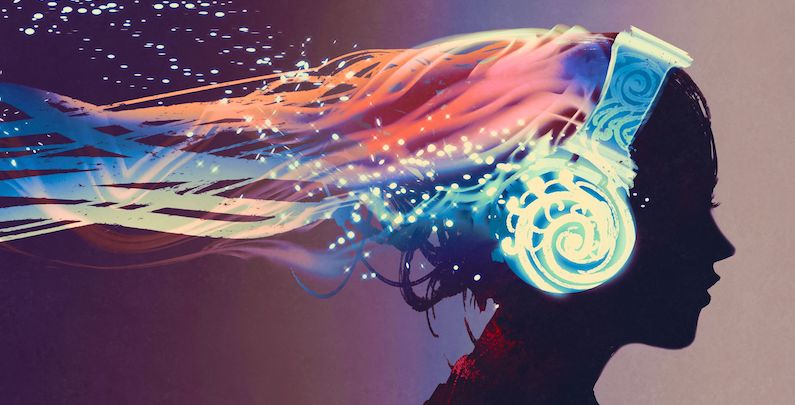 The Effect of Preference of Music on Reaction Time

A series of 4 collective, exploratory case studies were conducted in order to determine the effect of different genres on reaction time. The Brain Gauge System was used to measure raw reaction time via a tactile reaction time test, testing three different conditions: no music, preferred genre, classical music. The subjects listened to 10 minute increments of music on noise-cancelling headphones and took the tactile reaction time test once before listening and twice (2 minute and 8 minute mark) while the music was playing. Results indicated that there was a general trend of increased reaction time (i.e., decreased performance) with music playing in the background. An ANOVA test was performed, with a resulting p-value of 0.411. While statistical analysis proved the results to be insignificant, the trends found in the case studies indicate that listening to music worsens your reaction time. Furthermore, preferred types of music do not have a significant effect on reaction time. Consistent with literature, this indicates that music in general is a form of distraction, regardless of preference and genre. Further in-depth studies need to be conducted with a larger sample size in order to expand upon these preliminary findings.

Distractions come in various forms, whether this is visual, auditory, or tactile. These distractions have been shown in multiple papers to affect reaction times in test subjects. Reaction time is the amount of time between the stimulus presented to the subject and their reaction to that stimulus. In the context of distractions while driving, a hindered reaction time can have adverse effects on the drivers safety and the safety of others (passengers, other motorists, etc).

For the purposes of this study, we looked at auditory distractions in the form of music. We looked at the effect of different genres of music on reaction time. It was found in a previous study that music characteristics, like tempo and intensity, have an influence on learning outcomes. Researchers found that subjects with a higher working memory capacity had an increased ability to learn with background music on [1]. As working memory capacity is closely related to attention [2], this suggests that music could have different impacts on reaction time depending on their attention span. A study done by Turner et al. [3] showed that music played at a level of 70 dB improved reaction time. When the subjects were exposed to no music and music that was played at levels of 60 and 80 dB, it was found that their reaction times were significantly worse for a visual stimulus [3]. Using this information, we know that volume as well as music characteristics can affect reaction time.

Additionally, Brodsky and colleagues evaluated driver aggression when listening to different genres of music [4]. Music with aversive language, regardless of the genre, had a higher incidence rate than music with neutral lyrics [4]. These participants had increased cruising speeds, and a higher percentage of time exceeding speed limits. More energetic music was also shown to increase excitement, which led to decreased lateral control, increased excursions from the lane, and an increased incidence of straying into the shoulder of the road. These findings were labeled as “music-generated driver distraction”[4]. In the context of this study, we chose to look at the effect of music genre on reaction times, and use this information to determine if music-generated driver distraction was affected by music preference. It was hypothesized that preferred music would have significantly higher reaction times than no music or classical music.

This study was conducted using four case studies involving individuals aged 20-22 years old. Participants were asked to fill out a preliminary survey indicating their favorite genre of music. If the participant indicated classical music as his/her favorite, he/she was not included in the study. Once the music preferences were recorded, the participant took the tactile reaction time test (No Music Trial) using the Brain Gauge. The tactile reaction time test was chosen because the Brain Gauge has been proven to have the most accurate reaction time recordings [6]. All tests were completed using noise-cancelling headphones. For the No Music Trial, the headphones were placed on the subject’s head but with no music playing and the noise-canceling feature was activated. The reaction time and variability were recorded for this trial.

The subjects’ raw reaction times were gathered and averaged at each assigned interval and recorded in Table 1 and are displayed in Figure 1. All of the case study reaction times were averaged in each trial and variability assessed from subject to subject was recorded in Table 2 and displayed in Figure 2. Finally, two-tailed equal variance T-Tests were performed comparing our control trial (No Music) with each subsequent trial, and P-values were recorded in Table 3. Beyond the T-Tests, an analysis of variance (ANOVA test) was performed, with results shown in Table 4.

The genres chosen for each of the subjects are as follows: Pop, Indie, Indie, Country for cases 1, 2, 3, and 4 respectively. As mentioned in the methods, subjects tested throughout the day ranging from late morning to mid afternoon. These variables are important to note to understand what, if any, other factors could have contributed to a faster/slower reaction time. For example, a preferred genre, like pop for subject 1, has a more upbeat tune than the preferred genre of Indie, chosen for subject 3. Additionally, testing at different times throughout the day may have caused differing reaction times. For example, someone testing in the late morning, after a fresh cup of coffee, may have a faster reaction time than someone testing in mid afternoon just after lunch. Something kept in mind was whether this music was waking a subject up, who tested in the morning, or potentially putting them to sleep, if tested at night. Whether or not these variables had an effect can be seen by looking at the variabilities of each subject. A higher variability indicates a larger spread of data while a lower variability indicates a more condensed, smaller spread of data points. Overall, the variability was high between data sets, likely due to the low number of participants.

The variance between each condition was determined and then applied to statistical analysis. A one-way between subjects ANOVA was conducted to compare the effect of music preference on reaction time in no music, classical music, and preferred music conditions. There was not a significant effect of preferred music on reaction time at the p<0.05 level for the three conditions [F(4, 15) = 1.059, p = 0.411]. Additionally, a two-tailed t-test was performed for every trial. All 4 reported p-values were not significant, following suit of the reported p-value for the ANOVA analysis.

Competing literature, like the study conducted by Lehmann, J., & Seufert, T [1], has indicated that background music does not elicit a mediation effect between arousal or mood on learning outcomes. However, this study reported a negative interaction between music and working memory capacity [1]. Reaction time and working memory capacity activate different parts of the brain, with reaction time activating the brain stem and working memory capacity activating the dorsolateral prefrontal cortex. With that being said, both tasks are similar in that they require an attention span, allowing for comparison between the two. While this study referenced instrumental music, the results of increased reaction time when listening to music was inconsistent with our results of insignificance between all groups.

Additionally, a study that examined the effects of music amplitude on the reaction to unexpected visual events, conducted by Turner, M.L., Fernandez, J.E. and Nelson, K. [3], found that overall reaction times were slower for 60 dB than at 70 dB. Instead of the hypothesized linear relationship between volume (at 60 dB, 70 dB, and 90 dB) and reaction time, the results were a U-shaped correlation [3]. The music that subjects listened to in our study was at an estimated 59 dB, so based on this study, it was expected that the difference between the No Music trial and the different music trials would have been statistically significant due to higher reaction times while listening to music. However, according to the T-Tests in our study, this was not the case.

Our experimental protocol was modeled after the study by Zhang et al. [5]. Their study included taking reaction time tests at set trials while listening to piano music [5]. Our methods differed from theirs in that the preference is taken into account. In our study, reaction time was tested without music to act as a control trial. Classical music was used as a baseline music so observations on how the overall presence of music affects reaction time could be made. Preferred music was included to evaluate the difference between a baseline music, no music, and preferred music. We hypothesized that preferred music would have higher reaction times due to increased distraction due to increased levels of interest. For example, subject 4 reported singing along to songs as she listened to the country genre. This was a common report among all case studies. Thus, it was expected that adding another level of distraction like singing would increase reaction time; however, the ANOVA test showed no statistical significance. Zhang’s results showed much more statistical significance; after 1 minute of playing music, the reaction times increased by about 400 milliseconds on average compared to the No Music trial. Reaction time then decreased by about 250 milliseconds on average for the second music trial compared to the first music trial. It is probable that the significance of this data is due to the much more controlled environment. The study by Zhang also used six more participants than our study [5].

To further evaluate factors affecting reaction time past preference, the effects of the type of genre on reaction time was studied in Brodsky’s study “Music Genre Induced Driver Aggression” [4]. This study assessed the correlation between different music genres and driver aggression as measured by driving speed, lane deviations, and crashes on a simulation. The results concluded that playing music in general increased driving speeds in comparison to not listening to music while driving [4]. In addition, Brodsky found that music with violent or hostile lyrics increased overall driver aggression versus drivers listening to neutral music. Since driver aggression is associated with excitement, higher heart rate, and overall arousal of the nervous system, it assumed that for our purposes, violent or hostile music would decrease reaction time. These factors were taken into account when assessing the music played in each case study. All of the genres chosen did not include songs with hostile or violent lyrics or themes, so the effects found from this study were not relevant.

The limitations of this study included the varying environments in which subjects took the test. Though quiet settings were encouraged, auditory stimuli could not be equally reduced due to restrictions surrounding COVID. Visual stimuli and distractions were also not maintained constant from subject to subject, which could affect the variance in reaction times. The varying times of day and corresponding energy of the subject could also have greatly affected reaction time from subject to subject. In addition to the varying environments, it is possible that the study could have more significant results if it included more subjects to decrease variability.

In conclusion, despite conflicting results from multiple other literature, the trends in our data indicated that there is no statistical significance in reaction time with music compared to without music. In addition, our data showed no statistical significance in reaction time between the baseline classical music and the preferred genre of music. The way in which our study was executed also resulted in high variability in each of the different trials. In future renditions of this study, hopefully with less restrictions due to COVID, a controlled environment will be set up in which all subjects test, eliminating the different levels of distraction that were present in each case study. Furthermore, it would also be beneficial to use more participants in an effort to decrease variability.