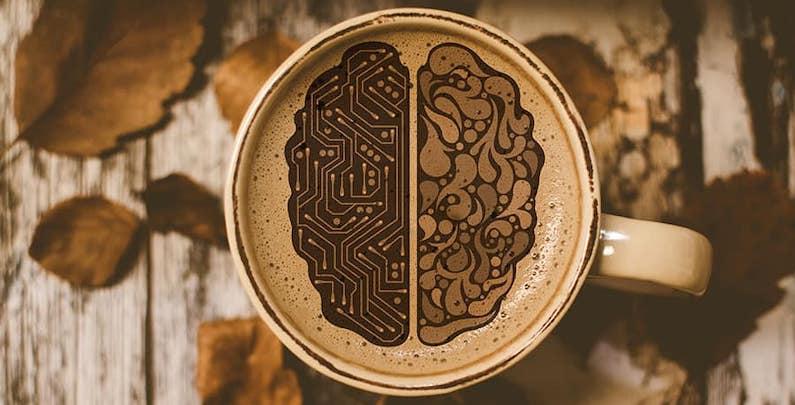 The Effects of Regular Versus Irregular Caffeine Consumption in Mental Performance

Caffeine, the most widely used psychoactive drug, is a central nervous system stimulant that increases alertness and excitation. Caffeine increases excitability in the brain by acting as an adenosine receptor antagonist, which means it blocks receptors to the neurotransmitter adenosine. The brain has multiple receptors that when locked with adenosine, promote relaxation, sleepiness, and cause an interference with the release of mood-enhancing neurotransmitters. When caffeine blocks adenosine receptors, it cannot bind, leading to the feeling of alertness and improved mood [1].

When caffeine is regularly consumed, one can become dependent on the drug. For individuals’ dependent on caffeine, disruption of consumption can lead to the experience of caffeine withdrawal. About 12-24 hours after stopping caffeine use, symptoms of caffeine withdrawal can begin [2]. These symptoms include headache, fatigue, anxiety, difficulty concentrating, depressed mood, irritability, tremors, and low energy [1].

Experiments have been investigated assessing how caffeine and caffeine withdrawals impact someone’s alertness and performance, specifically one’s reaction times. Caffeine withdrawal can often lead to a greater feeling of tiredness, lower performances on memory and reaction time tests as well as a lower mental alertness [3]. In an experiment, subjects (age 18-62) were given caffeine on some days and not on other days. The subjects completed memory and reaction time tests and the results were compared and analyzed. This experiment determined that caffeine improved most participants’ motor performance, however, it led to increased anxiety and jitteriness [3]. The experiment to be discussed is focused on specifically analyzing college students and assessing if caffeine has an effect on reaction time and choice reaction time.

In the case studies reported here, the effects of caffeine on mental performance (reaction time and choice reaction time) using the Brain Gauge were evaluated, and the cases included subjects that regularly consumed caffeine and subjects that did not. Determination of caffeine use in each case study was done via a survey prior to the study, and the participants took a survey about how they feel before the consumption of a specific amount of caffeine (coffee) and repeated these surveys 30-60 minutes after caffeine consumption. Reaction time tasks were also tracked with the Brain Gauge.

This case study series consists of 3 subjects, 2 of which are considered regular caffeine consumers who both consume coffee on a daily basis and 1 of which is not considered a regular caffeine consumer who consumes coffee or espresso once to twice a month. Each subject answered a brief survey before beginning the study to determine their normal level of caffeine intake. The study consisted of a “Before” survey and Brain Gauge battery, consumption of caffeine, then an “After” survey and Brain Gauge battery. Both surveys and Brain Gauge batteries consisted of the same information and tests. The “Before” protocol was completed by each subject before consuming any caffeine at the beginning of their day. The time, level of alertness, hours of sleep, and level of jitteriness were recorded, then reaction time and choice reaction time tests were performed using the Brain Gauge. For these Brain Gauge tests, the subject was advised to sit at a table or desk with the Brain Gauge device on a flat surface. Their dominant hand was placed on the device, then the battery was started. The reaction time test consisted of the middle finger tick vibrating at various times, then the subject clicked the index finger tick as soon as the vibration was felt. The choice reaction time test consisted of either the index or middle finger tick vibrating, then the subject clicked the tick that did not vibrate. The results of both tests are then recorded and can be analyzed within the Brain Gauge application. The subject then consumed caffeine, the amount and type were recorded in the survey, which consisted of either coffee or espresso for each subject. Approximately 60 minutes after consumption, the subject performed the “After” protocol, the same survey and battery of tests as before.

Subject 1 is considered a regular caffeine drinker, consuming on average 136mg of caffeine a day, which normally comes from 12oz of black coffee. This subject completed the case study for 7 days, beginning at approximately 8am and completing the final protocol at 9:30am. A 30-minute walk was completed before completing each initial protocol and the average amount of sleep the subject recorded was 7.2 hours per night.

Subject 2 is considered a regular caffeine consumer and consumes on average 190mg of caffeine a day which is normally from 16oz of black coffee. For this experiment, it is noted that Subject 2 proceeded with their normal caffeine consumption and drank 12oz of black coffee between the “Before” survey and Brain Gauge tests and the “After” protocol. The case study for Subject 2 was completed over the course of 5 days with the subject averaging each night with about 7.1 hours of sleep. The beginning survey was completed between 8:15am-8:45am and the final protocol was completed about 1 hour after the first survey and Brain Gauge test.

Subject 3 is not classified as a regular caffeine drinker and consumes caffeine about once to twice a month usually by drinking coffee or espresso. The caffeine source for this subject during the experiment was mainly espresso/lattes (specifically 8 ounces of prepackaged Starbucks® Caramel Macchiato) which had an average of 75mg of caffeine. Subject 3 averaged about 6.9 hours of sleep per night. This subject completed the before survey and Brain Gauge between 8:45am-9:00am and completed the after survey roughly one hour after. This case study was completed over the course of 7 days.

There are many factors to consider that affect a person's mental performance. The timing of the study was not consistent, meaning each subject did not perform the experiment at the same time as the others, and each subject did not perform the experiment at the same time each day. This may affect the scores of the mental performance tests due to the wakefulness of the subject at the time of the experiment. Experience with usage of the Brain Gauge software and equipment also differed with the subjects, with Subject 1 and 3 having 2.5 months of prior experience and Subject 2 having no prior experience. This would have introduced difficulty with using the equipment for Subject 2, affecting the scores. The type of caffeine consumed in the experiment was consistently coffee or espresso, but the sugar content differed. Sugar also can increase energy, which may have had an impact on the mental performance and jitteriness of the subject.

Another important factor to consider would be the amount of sleep the night before for each of the subjects. On average, Subject 1 reported 7.2 hours per night, Subject 2 reported 7.1 hours, and Subject 3 reported 6.9 hours. With this range of average hours of sleep being so small, a wider range in the future could help determine if the amount of sleep had an effect on the mental performance. The morning routine of the 3 subjects should also be taken into consideration in the future, such as activities done before completing the experiment. Other tasks being performed while completing the Brain Gauge tests could also account for drastic changes in the scores for the subjects. In the future, a more controlled environment should be used for the subjects when completing the battery.

Overall, the results of the study suggest that reaction time and choice reaction, on average, decrease, or become faster, after consumption of caffeine. Choice reaction time will consistently be slower than reaction time for all subjects. In order to better conduct this study and make a more accurate conclusion regarding caffeine consumption and mental performance, a larger pool of subjects should be used in a more controlled environment.